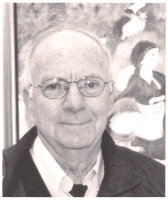 1929 Born in Germany
Following the events of Crystal Night (Krystallnacht), in November 1938, he was sent by his parents to a foster Jewish family in Dublin, Ireland
1944-1946 Studied at the National College of Art, Ireland
1946 Joined his parents and settled in the United States
1947-1950 Studied at Cooper Union School of Art and Engineering, New York
1950 Moved to Kibbutz Gal-On, Israel
1957 Moved with his family to a Moshav, Sde Warburg, Israel, where he raised sheep and grew avocados, while continuing his art.
1991 Retired from farming. Since then he has devoted himself entirely to painting.